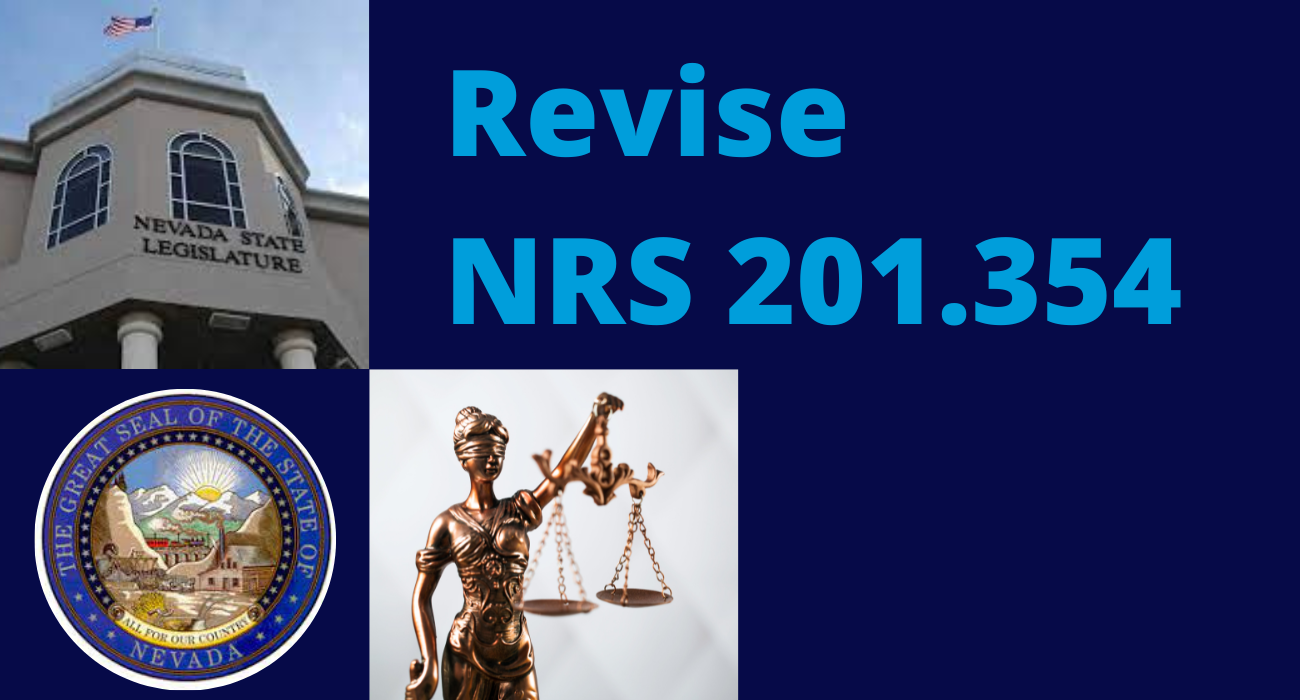 An unfortunate consequence of Nevada’s biannual legislature is that those who advocate for specific issues are impelled to focus on “low-hanging fruit” in the name of advancing legislation in a limited amount of time. It’s not that advocates lack significant objectives; it’s that a legislature that meets for only a few months every two years simply cannot address endemic social, environmental, and economic issues in a meaningful way due to constraints on both time and resources.

But, just because an objective appears easily accomplished doesn’t mean that it is not worth taking up. One such bit of low-hanging fruit in Nevada pertains to the statewide statute for solicitation, NRS 201.354:

1.  It is unlawful for a customer to engage in prostitution or solicitation therefor, except in a licensed house of prostitution.

As 201.354 is currently applied, it is utilized to charge both buyers and sellers of sex.

With the 82nd session of the Nevada Legislature set to begin on February 6, 2023, the Nevada Policy Council on Human Trafficking, which I co-chair, has identified 201.354 as requiring revision. It should be addressed in the upcoming session.

It is important to understand that while the transactional nature of commercial sex imbues a sense of consent, in fact, the seller is oftentimes a victim of sex trafficking and is under the control of a trafficker, or pimp. Human trafficking is a complex issue to comprehend, further complicated in Nevada by legalized brothels, which have created a market for sex tourism in our state.

It is not difficult, however, to see that using the same statute to charge buyers and sellers with solicitation does not make sense. It is problematic for a couple of reasons. One is that those who access arrest data for research or other purposes are tasked with distinguishing buyers from sellers. This is of lesser concern, but nonetheless causes complications in understanding the scope of the issue and effectively delivering services to victims.

The primary reason to change this law is that Nevada allows for the sealing of criminal records in misdemeanor cases. Record sealing is not the same thing as expungement – with record sealing, the records are not destroyed but rather are rendered invisible on background checks. What this means in practical terms is that one year after conviction (or beginning after a case closes if there is no conviction), a buyer can have their records sealed. The seller, or victim, has this same prerogative, however, law enforcement representatives tell the NPCHT that typically a victim lacks the resources necessary to have records sealed. Therefore, it is primarily the buyers who are taking advantage of record sealing.

Consider the low monetary fines currently in place for those convicted of purchasing illegal commercial sex in Nevada (bolding is mine):

3.  Except as otherwise provided in subsection 5, a person who violates this section:

(c) For a third or subsequent offense, is guilty of a gross misdemeanor and shall be punished as provided in NRS 193.140, and by a fine of not less than $1,300.

4.  In addition to any other penalty imposed, the court shall order a person who violates subsection 3 to pay a civil penalty of not less than $200 per offense. The civil penalty must be paid to the district attorney or city attorney of the jurisdiction in which the violation occurred.

While it is appalling that a buyer can violate 201.354, pay negligible fines, and then have the records sealed only one year later – and do this repeatedly with little fiscal, professional, or reputational damage – there is a relatively simple fix as legislative fixes go. Legislators must pass legislation next session separating the crime of soliciting prostitution as a buyer into a new NRS number, sensibly 201.355. While doing so, victims, and all Nevadans, would further benefit from restricting those convicted of purchasing commercial sex from being able to seal this criminal record.

We have made a number of gains in combatting human trafficking in Nevada, thanks to the hard work of survivors, advocates, law enforcement, service providers and non-profits, our resort industry, and lawmakers who have taken the time to understand the issue, the victims, and the needs in our state. We saw several important legislative advancements in the 2021 session, but we can go further in the next session.

As we work to make Nevada inhospitable to human trafficking, not all of the solutions are easy or obvious. Most are neither. This one is both. Let’s pass a law in 2023 that statutorily distinguishes the purchasers of commercial sex from the victims, and makes it more difficult for victimizers to wipe their records clean.

About the Author: Kim Harvey

Kim Harvey is a member of the ImpactNV board of directors and is a co-chair of the Nevada Policy Council on Human Trafficking.
Published On: July 27, 2022Categories: Social Sustainability0 Comments
Share this
Tweet this
Email this