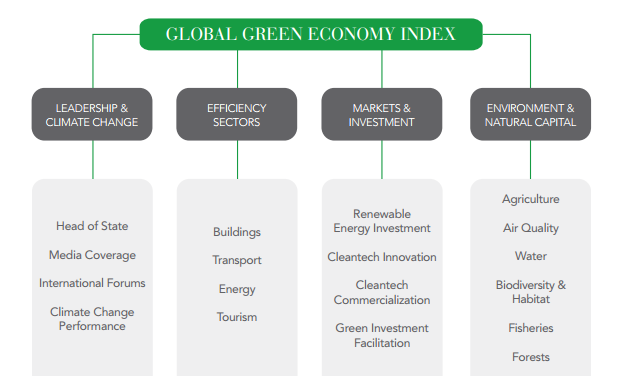 Perception vs. Performance: The Global Green Economic Index 2014. The Global Green Economic Index (GGEI) is a detailed ranking of 60 of the world’s countries, outlining their “green” economic performance. It acts as a report card for world leaders, government officials, policy makers and citizens, indicating how well each country has moved their economy in a greener direction.

This years edition brought to light the drastic difference between several developed countries perceived and actual scores. Countries such as the Untied States are perceived to be far more “green” than the GGEI has determined they really are. Having been published since 2010 by Dual Citizen, this index measures each of the 60 countries in four categories:  leadership and climate change; efficiency sectors; markets and investment; and environment and natural capital.

Which countries actually came out on top? And which fell short of their perceived scores? Germany landed the number one spot on the perception ranking, only 3 spots ahead of their 4th place performance ranking. In the number one performance slot is Sweden, two spots ahead of their 3rd place perception ranking. While both Germany and Sweden’s perception and performance scores we not far apart, other countries were not so closely ranked on both scales. According to the GGEI, the United States is perceived as the world’s 6th greenest economy, but barely makes it in the top 30 performance ranked countries, falling at 28.

Here is a list of the top 30 countries in both the perception and performance categories. (View the full report for a complete list of all 60 countries.) 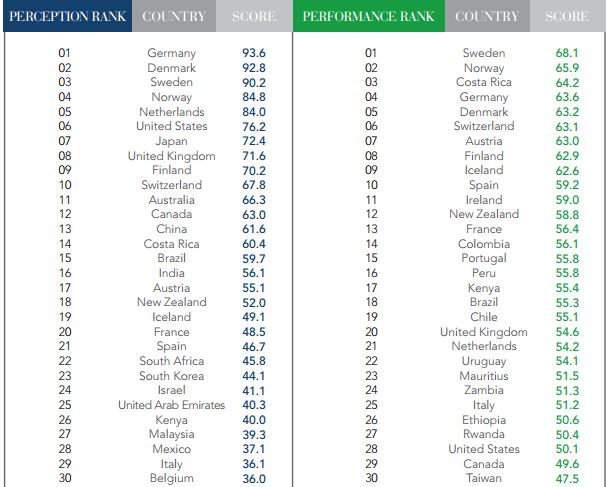 Other standouts in the index included Costa Rica, ranking third on the performance scale on their first time on the index, and Copenhagen, taking the number one slot as the world’s top green city. In addition, the index notes that a countries capacity for communication plays a large role, as the perceived green economies of developed countries like Japan, Australia, the Netherlands, and the United States were much greater than their performance ratings. Conversely, a handful of European nations ranked much lower of the perception index than on the performance side, revealing the importance of communication in the spreading of greener practices.

To learn more about the GGEI 2014 and the world’s green economy, read the full GGEI 2014 report here!