The LVGEA is a membership organization that works throughout Southern Nevada to encourage community development and connectivity, though aggressively and strategically recruiting new industries while helping existing businesses to expand.

Their 2016 annual report highlights a positive year for the region’s economy as it continues to strengthen following the previous economic downturn. With unemployment rates at their lowest level since 2007 and job growth at one of the highest rates in the country there is reason to be optimistic about Southern Nevada’s future.

Through the LVGEA’s commitment to develop communities and increase connectivity both locally and globally they have seen some very impressive results. Working with its members, community leaders and political partners, including the Governor’s Office for Economic Development they have collectively attracted a further 7,260 jobs to Southern Nevada.

With the creation of these jobs has come a predicted $6 billion in economic impact over the next year. $122 million in local taxes and $1.65 billion in capital investment.

Aside from the impressive figures LVGEA have sought to encourage business education, local connections and small business development. The LVGEA and UNLV’s Small Business Development Center (SBDC) signed a memorandum of understanding in April, in order to enhance efforts directed at small business development and entrepreneurs. Through the agreement, the SBDC will provide guidance to private-sector leaders interested in developing their businesses in the area. In return, the LVGEA will provide office and conference room space to UNLV’s SBDC to meet with prospective clients. The LVGEA will also provide the SBDC with information and networking assistance that will support them in helping their clients.

Working with the Governor’s Office for Economic Development representatives travelled to Australia in August as part of a Nevada Trade Delegation. Along with GOED, the LVGEA joined other participants from the City of Las Vegas. With stops in Melbourne, Sydney, and Brisbane, the LVGEA met with Australian private industry leaders interested in pursuing or strengthening business ties in Southern Nevada, focusing on the areas of water technology commercialization, research and education, mining, tourism and gaming, and unmanned vehicle technology

It is this collaborative work and networking that is leading to the success of the LVGEA and in turn Southern Nevada. Working to creating connections both locally and globally is securing Nevada’s status as a great place to do business globally and diversifying the economy.

In order to build upon their successes, the LVGEA have grown their board members to 46. Making it one of the largest business C-Level business boards in the South West United States. They are also looking to be active in the 2017 legislative session, and will continue to run networking and collaborative events to build a prosperous future for Southern Nevada. 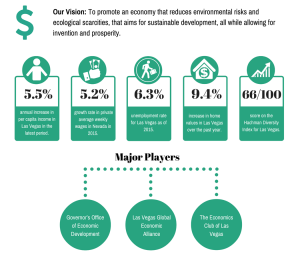