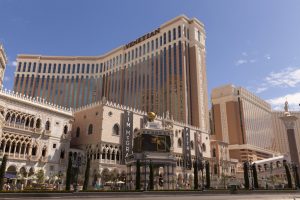 The Las Vegas Sands, ranked 18th overall, and the highest ranking in the hospitality industry, was noted for gold LEED certifications for its existing buildings at the Venetian and Sands Expo Center, and for silver LEED certification for new building construction at the Palazzo. Sands was also recognized for its green certifications for all regions of its properties, singling out the Sands Bethlehem (Pennsylvania) property built on the old Bethlehem Steel plant — the largest brownfield site in the U.S.

MGM Resorts, ranked at number 82, and 3rd for the hospitality industry, was noted for its efforts at the Mandalay Bay convention center, where a rooftop photovoltaic system will be installed on the convention center expansion. When completed, it will be the largest solar installation at a convention center in the world, with enough solar power generation to power the equivalent of 1,300 homes. Other properties have included a number of energy efficient changes including lighting retrofits, saving four million kwh of energy a year. In addition, the MGM properties at the Aria and the Vdara were singled out for their LEED platinum designations.

For the complete story and related links, please click here.