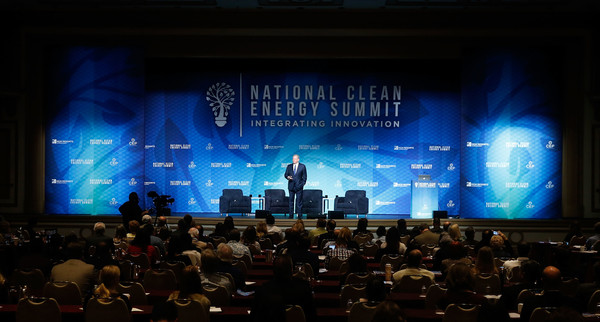 Back with a Bang

The summit which returned after a year off provided a host of excellent speakers including names such as Former Vice President  Al Gore who highlighted the importance of renewable energy in addressing climate change, a topic close to his heart with his work “an inconvenient truth”. The key note speaker warned of the catastrophic impacts of taking a business as usual approach but also gave a source for optimism as he said leaders from both of the main political parties were starting to take the problem more seriously, as demonstrated by the co-hosting of Senator Harry Reid (Democrat) and Governor Sandoval (Republican). He also pointed to evidence suggesting the renewable energy economy has “really taken off” in recent years, especially in areas like Nevada.

The impressive roster of panelists continued to advance the conversation on sustainability, focusing on accelerating the development and deployment of renewable energy, energy efficiency technologies, and robust clean energy markets. Governor Sandoval also participated in a Governors panel which took a key look at the role of storage in the clean energy mix. Drawing on examples from various states the panel talked about the potential for more storage to be integrated with solar power for homeowners, although they conceded there is still room for improvement on the capacity and cost of storage technologies. Due to the intermittent nature of solar and wind battery storage is critical in ensuring the long term success of clean energy.

Also encompassing ideas of storage, new ImpactNV board member Tina Quigley focused on the opportunities around low carbon transport. The Regional Transportation Commission General Manager believes Las Vegas is well positioned to take advantage of innovative technologies to provide a cleaner, safer and more efficient transportation system. She stated that companies such as Audi were testing technologies in Southern Nevada such as letting drivers know how long is left in a red light cycle, where accidents had occurred and other information allowing drivers to avoid congestion. Reducing congestion can have a big impact in decreasing carbon emissions, especially when coupled with the increase in uptake of low emission vehicles.

Another key discussion took on the subject of national security and the role renewable energy can play in making our country a safer place. Marine Lt. Gen. Richard C. Zilmer drew upon his experiences fighting in Iraq and how many soldiers were killed in convoys whose main purpose was to deliver fuel for generators, thus highlighting how local clean energy could save lives. The Military is increasing its use of renewables including Nellis Air Force Base which has installed 28.2 MW of solar power on site. Renewables can also help to reduce geopolitical tensions that can impact on our accessibility to a fuel source and a diversified grid is less susceptible to terrorist attacks.

The one day event saw the 380 attendees thoroughly engaged be the high caliber speakers on show. The National Clean Energy Summit certainly provided many fascinating insights onto our low carbon future and the crucial role innovation is and will play in its future.

Published On: November 5, 2017Categories: Southern Nevada, Sustainability in the NewsComments Off on National Clean Energy Summit 9.0
Share this
Tweet this
Email this