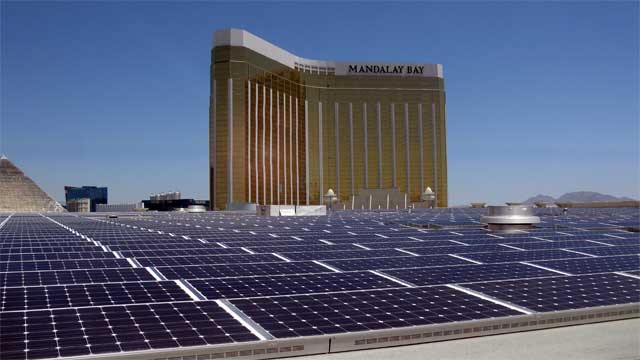 Mandalay Bay Solar Installation Gets Noticed. The Mandalay Bay, an MGM Resorts casino, unveiled it new solar instillation this last Wednesday, making it one of the largest installations in the world. This fact didn’t go unnoticed, as Energy Secretary Ernest Moniz was in attendance.

This commercial industrial solar installation has 21, 324 panels and has been under construction by NRG Energy since August. The system is set to be up and running by the end of November, supplying 20% of the resorts operational energy. With the capacity to power almost 1,000 homes, the solar array will result in major carbon emission reductions.

Secretary Moniz’ presence was largely due to the Department of Energy’s (DOE) involvement in the project, having funded 20% of the panels with a 2009 stimulus grant. This project is a huge step forward for the DOE’s solar funding programs, and is one of five other projects that they have funded this year.

MGM Resort’s Chief Sustainability Office, Cindy Ortega, has said that the project was more than just an environmental gain, but an economic gain for the company as well. MGM is considering installing additional solar on their other Strip proprieties.