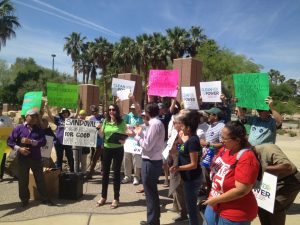 A myriad of groups ranging from Renew NV, The Nevada Conservation League and Chispa to Solar Installers, UNLV and local Churches gathered outside of the Grant Sawyer State Office in Las Vegas to encourage Governor Sandoval to sign bills AB 206 and SB 392.

Vinny Spotleson the Program Director of the Nevada Conservation League led the cohort as they delivered a petition containing nearly 8,000 signatures from people wanting these bills to pass in order to secure a brighter and more environmentally friendly future for Nevada.

AB 206, sponsored by Assemblyman Chris Brooks would increase the Renewable Portfolio Standard (RPS) with 40% of electricity to be produced from renewable sources by 2030. Supporters believe the bill would help boost jobs, reduce reliance on imported fossil fuels and improve the environment.

“We need to AB 206 to become law this year,” said Louise Helton, owner of 1 Sun Solar, a rooftop solar installation company based in Las Vegas. “It will assure Nevada creates thousands of jobs from the fastest growing sector in the United States economy, clean energy.”

SB 392 introduced by Senator Mo Denis looks to bring community solar to Nevada. The bill would make solar more accessible to lower income families and renters, allowing them to also be part of the green revolution while having the addition of financial benefits for communities involved. This can include money to renovate local buildings or improve energy efficiency. “Every Nevadan should be able to choose solar to power their energy needs, whether it’s on their roof or around the corner,” said Jessica Scott, Interior West Director for Vote Solar.

Both bills have passed votes in the Assembly and the Senate but require Governor Sandoval’s signature to be put into action.

Published On: August 4, 2017Categories: Southern Nevada, Sustainability in the NewsComments Off on Groups deliver signatures to Governor Sandoval in support of a sustainable future
Share this
Tweet this
Email this