Home/Benefits of Community energy: Potential for Nevada?
Previous Next 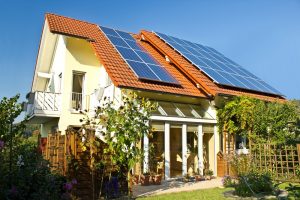 Historically, energy has been local. Settlements were built near natural resources such as wood for fire or water to turn millstones, progressing into small scale utilities, producing energy and distributing it to the surroundings. Progressively, due to the greater generation capacities of oil, gas and coal, more centralised energy systems, have led to energy being transmitted over long distances.

We are now in the midst of a new energy era. With climate change an ever increasing concern, fossil fuel supplies rapidly declining and a fast growing energy hungry population, the world has increasingly turned to renewable energy as a solution. Energy generation from solar, wind, hydro and other renewable sources offers a viable way to reduce carbon emissions, reduce the demand for finite resources and improve environmental health.

In order to maximise the social, economic, health, and environmental benefits of renewable energy there is a need for more community ownership and participation. It is in many ways ironic that societal progress gave birth to centralized generation and it is now that same progress that requires us to go back to our local roots.

Community energy refers to renewable energy and energy efficiency efforts led by the community and owned/controlled wholly by the community or in partnership with private or public entities. With the democratic management, participation and shared benefits integral to community energy projects, it can create a basis for the significant infrastructural and cultural change required to tackle climate change, energy justice, security and to boost local economies. These ideas are integral to the United Nations initiative of Sustainable Energy for All (SE4ALL) who focuses increasing access and duplicating both renewable energy and energy efficiency efforts.  At the Latin America and the Caribbean (LAC) of SE4ALL in 2014, Chilean President Michelle Bachelet proclaimed “Democratization of Energy should be the sign of our times” highlighting the global importance of locally owned energy and its holistic benefits.

Community energy can stabilized energy prices and improve consistency as they are not dependent on the global price of fossil fuels. In recent years there have been huge spikes in global oil and gas prices which have been passed on to consumers due to a reliance on imported energy. Moving to a more democratized system such as community energy can result in reduced energy bills and more stabilized pricing as well as increasing energy security. Unlike corporate companies, community projects are not driven by making large profits for shareholders.

Another major regional benefit is an increase in local employment. While renewable energy as a whole creates more jobs than traditional energy production, community owned renewable projects create an average of twice as many jobs as absentee-owned projects. Unlike commercial projects, communities often use local tradesmen, adding greater value to the economy. Work comes in the form of shorter term construction jobs, planning, consultancy and longer term maintenance and administration roles. Research by Community Energy England found 45% of the projects spend went to local contractor. The main expense that left the community was the purchasing of specialized equipment which often came from abroad.

A major concern for potential projects is accessibility to financing. While most projects are constructed using capital from share offerings there are significant costs associated with planning, grant applications and feasibility studies prior to generating any income. This has created a reliance upon grants that could be argued as unsustainable for the sector. A key reason for this is the life cycle of the grants being offered, forcing communities to rush through their applications in case the finance vanishes. This highlights a need for governments to implement a long term financial plans with no flip flopping of policy to increase confidence in the sector

There is a need for a consistent policy supporting community energy projects over the long term, or until the technology is cheap and efficient enough to be self-sustaining. Many projects are reliant on the support of a feed-in-tariff type mechanism to make them financially viable, essentially an incentive from the government for producing clean energy.

While projects clearly generate money and provide jobs locally they are also reliant on volunteers, especially prior to the generation of any energy/income. By placing so much expectation on volunteers it could have the effect of making success more unreliable and projects taking significantly longer. Therefore, community projects need consistent policy and financial support to become established and to enable local economies to  flourish and to reap the economic benefits of locally produced energy.

There are numerous holistic, economic, environmental and security arguments for the development of community energy projects. Reducing fossil fuel resources and access means that it is imperative that we work on building a mixed economy of sustainable energy. Emerging research shows that energy projects which involve the community are well supported by the community and can provide a significant contribution to social wellbeing, resilience and health of a region. There are many further economic arguments for the development of community energy that merit a more in depth discussion in subsequent posts. While the economics may often be the driver towards a project coming to fruition it is clear there are many more holistic benefits that should also be considered when designing our new energy landscape.